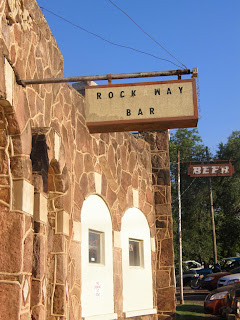 It's a well-known fact that Guthrie has ghosts.  Why not?  The city is rich in history and scandal, so why wouldn't souls want to hang around for a while post-death?  There is a whole website dedicated to haunted places across Oklahoma, but I want to tell you about one that is maybe a little less known.

The city of Guthrie sprang up in a day in 1889 with the Oklahoma land run.  It was the original state capital when Oklahoma gained statehood.  Then, overnight, the state seal was supposedly stolen and moved to Oklahoma City, making Oklahoma City the new capital.  Not long afterwards, the Rock-A-Way Bar was constructed by a federal marshal and some prisoners in the former capital.

I accidentally stumbled across the Rock-A-Way ghost story on my way to the first-ever Make Guthrie Weird block party in June.  When I tried to find more information about the block party; that I only knew about because one of my favorite Okie bands, Porch Mice, was playing; I discovered that there was also a noodling festival in Guthrie that same day.  It's not exactly on the same scale as the Paul's Valley festival for the same sport, but provides its own brand of entertainment.  That's how we ended up at the Rock-A-Way Bar, sitting at a table with one of the owners - Maxine Duncan.

"They say this place is haunted," Maxine tells us when we discovered that she and her husband had fairly recently acquired the "Rock".  I have to confess that I might not have believed myself when I told her I would only use the video for purposes of remembering the story she was about to tell.  As soon as I set the camera on the table, Maxine straightened her hair and leaned in, like a pro.  I do believe that she might have been telling her own little white lie when she said that she wasn't very good on camera.  I'll let Maxine tell the rest of the haunted story of the Rock-A-Way: