The challenge to experience 100 Adventures in 2012 culminated with one of the most beautiful hikes I've ever experienced.  The combination of terrain, time of year, and weather were the perfect recipe.  Long overdue, here is Part 2 of the 100 Adventures:

We started our journey when the moon was still a bright sliver in the early morning blackness.  Our little group was headed to SE Oklahoma to hike Horsethief Springs in the Ouachita Forest.  The trail is an 11-mile loop, which was ambitious for our meandering ways on a short, November day.  Plus, our adventures almost always include detours, and this one would be no exception.

The scenic drive took us though Wilburton, so we decided to swing by Robbers Cave State Park to visit the 2nd Largest Pine Tree in Oklahoma.  I've done a bit of online research since then, trying to find the 1st largest pine tree in Oklahoma, but with no success.  There were some shaggy mane mushrooms in various stages of autodigestion there.  If I would have known what they were at the time, we could have eaten them.  Since my foraging skills are a bit lacking, we left them alone.

Our route continued along the Talimena Drive.  We had driven the entire 54-mile scenic drive two weeks earlier to catch the fall foliage, and the color was even more brilliant now, although some of the trees had already dropped their leaves on this blustery day.  We turned off the drive and stopped at Cedar Lake where we could pick up the trail.  There, we ran into friends who were camping and backpacking for the weekend.  We were invited to share lunch with them, but we now had about five hours of daylight remaining, despite our early start.  That tends to happen often when you take the scenic routes and stop for photographic opportunities along the way.  The journey is definitely at least as important as our destination on these adventures. 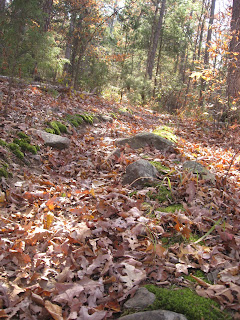 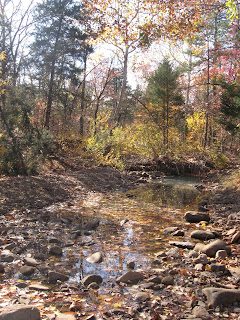 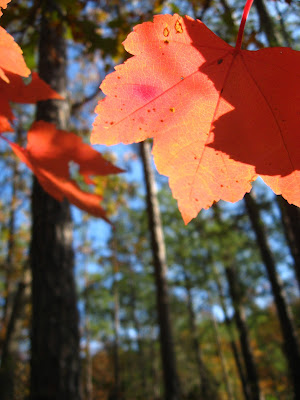 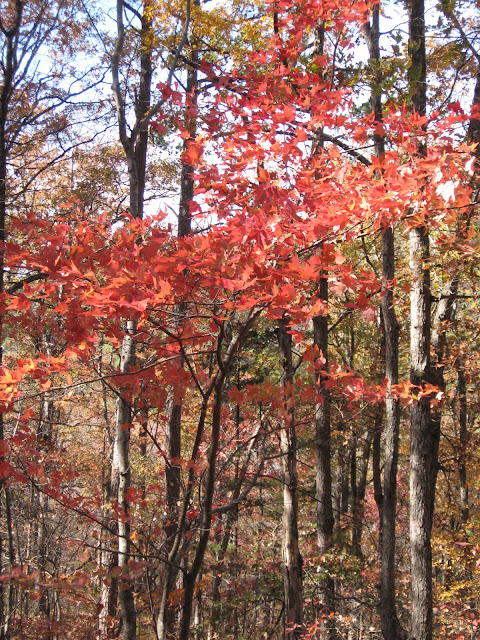 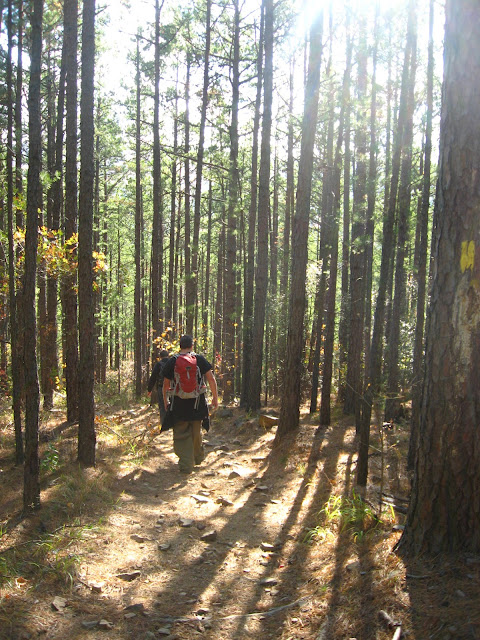 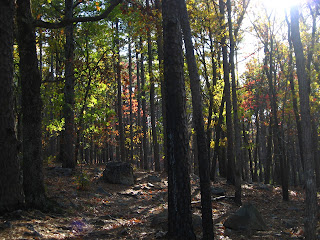 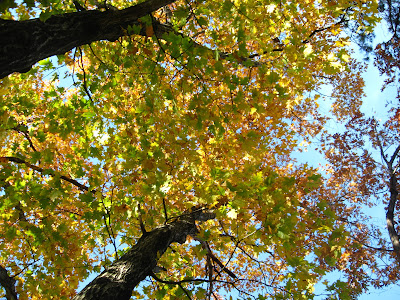 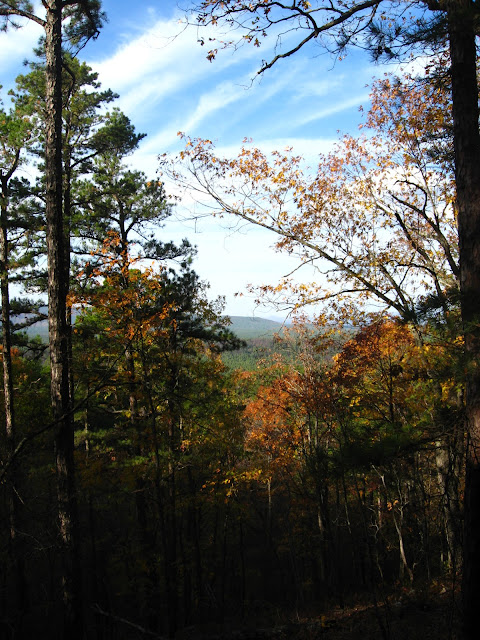 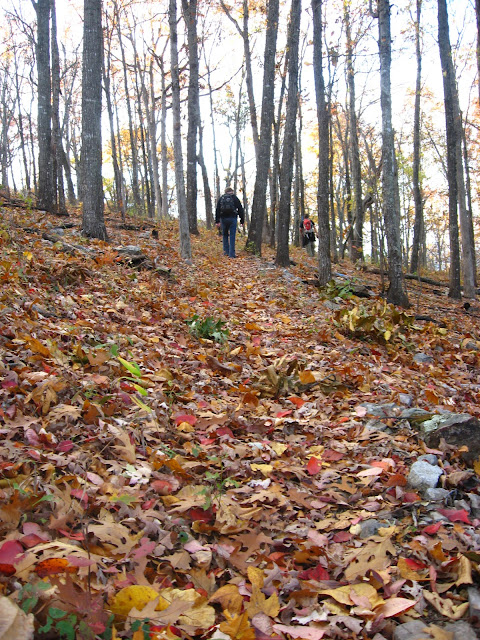 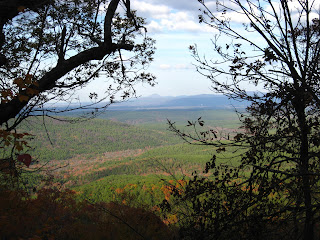 Horsethief Springs Trail took us through tall pine trees and red and gold deciduous trees.  We crossed a few semi-dry creek beds and climbed uphill to join up with the Ouachita Trail for a mile or so.  We passed through areas recovering from recent fires and dense new-growth pine groves.  One section of trail turned lush green with healthy grasses among rockslides. 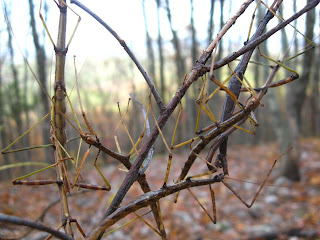 Along the top ridge of the Ouachita Mountains, the trail became deep in colorful leaf litter.  I spotted a walkingstick among the leaves on the trail.  It was cleverly camouflaged with its surroundings, displaying the same fall colors as the leaves it consumed.  Once the first one had been spotted, then we started seeing them EVERYWHERE.  It was most definitely mating season for them, as they gathered in large, amorous groups.  It was difficult to walk, since they seemed to cover every foot of trail and tree.  I later discovered that there is an extreme infestation of them in the Ouachita Mountains, and their leaf consumption can kill the oaks and other hardwoods that they live among.  We unknowingly transported several along the trail, as we each caught one or more hitching free rides on our pant legs. 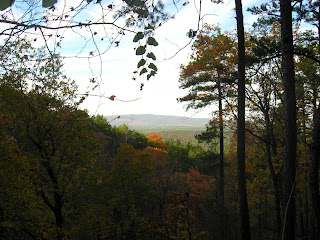 Our pace increased as we reached the halfway point and could see the sun getting lower in the sky.  It was impossible not to stop for breathtaking views of the colorful treetops as we peeked past the pines and into the hillside below.  Thankfully, the last three miles or so were mostly downhill, so we just had to be careful not to trip on the plentiful rocks that were on the path as we admired the beauty around us.

Just as the sky was changing from orange to pink to dark blue, we temporarily lost the trail.  As much as I had desired to spot a bear or cougar, I really didn't want to spend the night with them, exposed in the cold forest.  We backtracked until we spotted trail markers again and made it back to the car just as the last bit of light dwindled. 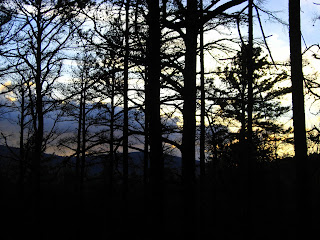 We had to make a quick stop back at the Cedar Lake campground, just to let our friends know that we survived the hike and covered more than ten miles in five hours flat, while still stopping to enjoy it.  Declining the camp food buffet, we chose to grab some gas station diner food on the way back home.  The sliver of moon guided the car as we journeyed back - exhausted, legs aching, and thrilled with the sights from the 100th adventure of 2012.

Where will your adventures take you this year?