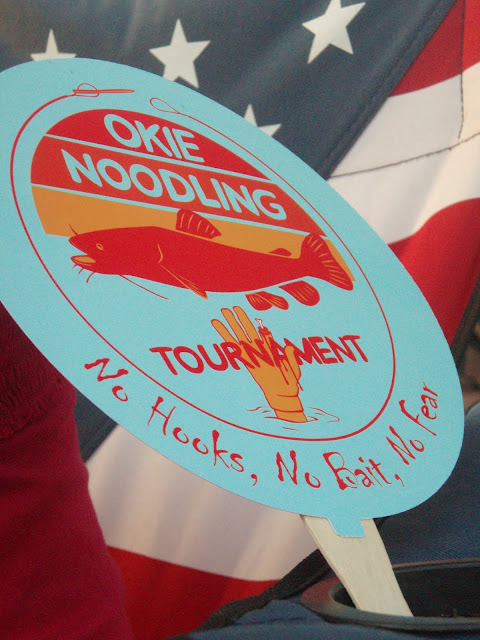 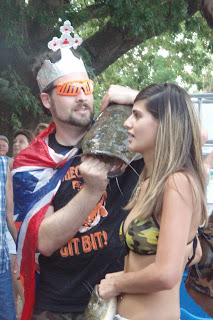 It has become a rite of passage - to be considered an Okie, you must attend the Okie Noodling Tournament in Pauls Valley.  Noodling, for those of you too northern to know, is the sport of catching fish sans hook and bait - just two bare hands and two lungs of breath.  Initiation begins when you double-park your truck on the grass and start the tailgating.  Break out the coolers of beer, jean cut-off shorts for men and women alike, and release the tats for all to see.

July 9th was the 12th annual Okie Noodling Tournament, and my official induction as an Okie after almost 36 years here.  Mercury reaching 109 didn't stop thousands from flocking to the park for a day-long festival for all ages.  After passing the moon-bounce and Indian taco stands, we set up our shade tent and camp chairs for an afternoon of full-on, people-watching entertainment. 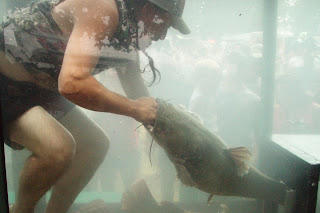 Bands played on one stage throughout the afternoon, while trucks rolled in with their hand-caught treasures.  The fish were hauled out for official weigh-in, with the biggest going in a tank on the main stage.  Others went into a trailer with clear sides for all to watch demonstrations on the finer points of noodling.  Who knew that you could wear your ball cap underwater while you grabbed a catfish out of his hole? 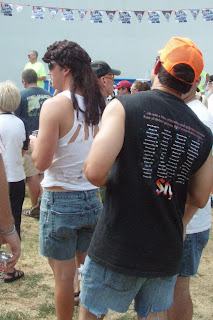 There was limitless entertainment when it came to apparel.  The obvious choice was any combination of red-white-and-blue, camo, overalls, and questionable t-shirt screenprints.  I was slightly disappointed in the lack of mullets and rat-tails, though there were a few (real and fake) spotted.  Professional film crews were busy capturing the details for the unfortunate ones who are unable to attend in person. 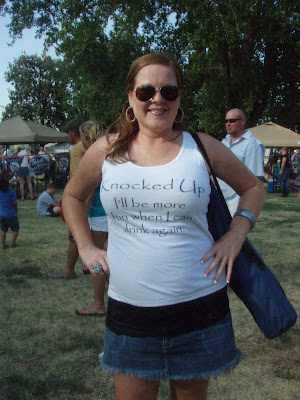 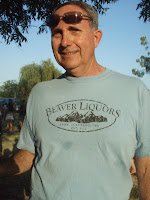 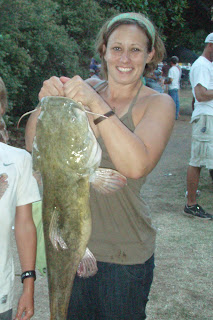 I am proud to now be able to say that I've been noodling.  Even though it was only in a large water tank in the back of a pickup, I still reached in the murky water and grabbed a HUGE catfish by his lower jaw and pulled him into the air.  The Redneck Wars team that rightfully caught the fish in the river claim that he was about 25 pounds, but I swear he was at least 60.

Now that I had that under my belt, I am onto my next quest - being crowned Noodling Queen.  It appears that there were only two contestants for the sash and crown.  I don't recall seeing any information anywhere on how to get my name added, but I will be back next year and I will be prepared.  I bought a bump-it, cut off a pair of jeans short enough for my pockets to hang out, and scoured the internet for a confederate flag bikini.  Reigning Noodling Queen - look out!  Your days are numbered.

When the last pickup rolled up to the weigh-in station, the awards began.  There are cash prizes up to $1000 for the top noodling teams.  Categories include total pounds of fish caught, biggest fish, biggest catch by a female and by a minor, and smallest catch.  The humble man who hauled his 7-lb catch to the weigh-in (biggest catch of the day was 60 lbs, for comparison) actually stuck around to receive his tiny trophy and pose for a picture for me - grinning the whole time.

Pauls Valley has come a long way since the first Noodling Tournament 12 years ago when just 50 people attended.  This year, there were over 6,000 who sweated it out in Wacker Park.  While the beer is abundant and the teeth few, it is a crazy and peaceful experience - unless you are a catfish.  Needless to say, I'm "hooked". 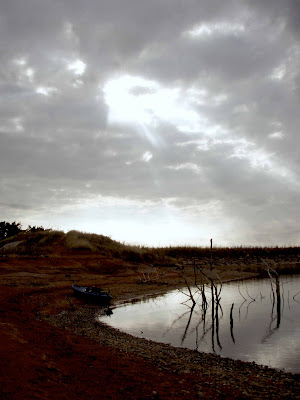 Ten miles from the main drag in Geary is a treasure that few have discovered.  It is only about an hour by car from Oklahoma City, but yet as remote as you can imagine.  It is a small spot of water - clear and alive.  Human traffic is sparse, quiet, and respectful.  You might have seen the plain wooden signs pointing out the direction of the lake, but without willful planning to visit those waters, you would never catch a glimpse.  It is American Horse Lake, and one of the best kept secrets in this state.

My first visit to the lake was a camping and kayaking adventure.  Camping is primitive - no facilities whatsoever.  Every campsite has an indecent offering of prickly sandburs to make flip-flops unbearable.  It is also rough on puppy feet, so consider this fair warning.  The kayaking though...the kayaking was spectacular.  The water was rivaled only by the starlit sky of a new moon that made flashlights unnecessary. 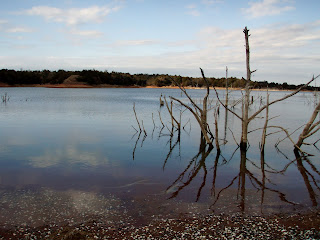 Since that weekend, I have been addicted.  I have cravings for that water that can only be satisfied by loading the boats and making the short journey.  A few years ago, there were three spots in the road to the lake that were washed out by flash floods.  Our caravan loaded with kayaks tried desperately to go off-road and find a passable route to reach our destination.  Twice we were successful.  When just a mile and a half separated us from the clear waters, our vehicles were defeated by the deep gully that divided the road.  It might not have been too far to portage the boats, but we knew that the return trip would be torture on our weary arms.  There was nothing left to do but turn around and drive back to the city, dejected and disappointed.

Today, the roads have finally all been repaired.  Every couple of months, when the craving dominates my thoughts, I load up the boats and head to my private paradise.  I roll the windows down and fill my lungs with the non-city air.  Every meadowlark I pass widens the smile that stretches to my eyes.  Anticipation replaces daily stresses.  By the time I park the car by the small boat ramp, I am already deep in my therapy. 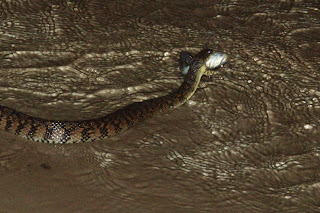 What is it about the lake that entices me?  It's the complete lack of man-made sounds, with the exception of an occasional trolling motor.  It's the smooth travel of fish and turtles, many feet below the surface - yet, still visible from above the waterline.  Maybe, it is the canyon below the dam that I have yet to fully explore.  Or, it is the quicksand area on the northeast side where herons and egrets rest and bullfrogs make their families.  At night, it is the call of the Chuck-will's widows, coyotes, screech owls, and wild boar that empowers my senses to overtake my mind. 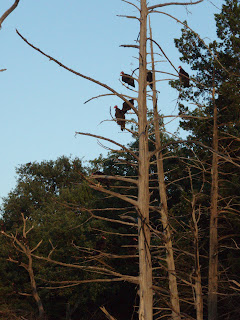 There are sun-bleached skeletons of trees rising from the water and telling of lives before the area was dammed.  Turkey vultures adorn the white branches like a candelabra.  Kingfishers launch their dives from these same platforms.  Yellow-billed cuckoos and painted buntings flit through the cedars above red foxes and armadillos.  Red-eared sliders sun below the singing cardinals.  Whole flocks of wild turkeys fly clumsily overhead and common water snakes catch small catfish in the shallows.  If I'm lucky, I will catch a glimpse of the roadrunner that I can identify by his sound alone.

American Horse Lake is a wonderland that gives my soul new energy.  If you get the chance, come experience the enchantment that this spot beholds.  Just do me one favor - let's keep this place our little secret.
Posted by Nancy L at 2:25 PM 2 comments: