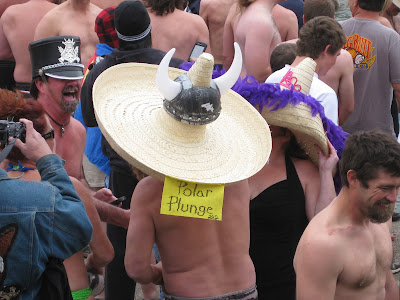 The alarm clock went off and I giggled as I reached to turn it off. Not my usual morning attitude, for sure! But, this morning was different. It's a Saturday. It's 40-something degrees outside with a windchill in the 30s. The sun is on hiatus. It's a perfect day for Park Tavern's 15th Annual Polar Bear Plunge! 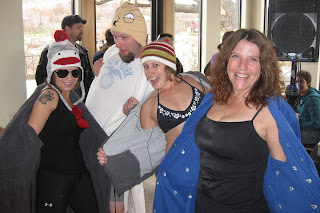 Twenty-four hours earlier, the plunge seed was planted. Why not? It has been an amazingly warm winter, so far. What better year to do this? Besides, the day before was almost 70 degrees. By lunchtime, my mind was made up - I was going to do this, regardless of whether or not I could get anyone to go with me. Fortunately, I have LOTS of crazy friends, so by morning we had a lovely party of four. 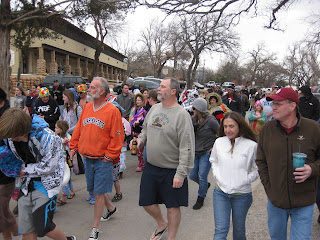 When we rolled into Medicine Park a little before noon, the Park Tavern was not yet open and Bath Lake was quiet with just a couple of fishermen and some Canada geese. We stopped in at Mrs. Chadwick's Bakery and shared coffee, a buttery cinnamon roll, and a melty-delicious coffee cake. Mrs. Chadwick told us about her first experience with the plunge just a year earlier. She and her husband were getting ready to open the bakery and were busy painting and hammering. Suddenly, the street outside was mobbed with crowds of people in crazy hats and bathrobes, all marching north. They put down their hammer and paintbrush in time to witness their first plunge. 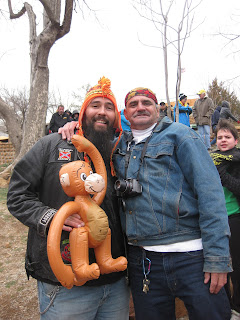 We met veteran-plunger, Savannah - the mayor's daughter. In her hoodie and braces, Savannah told us about her first plunge two years ago. She said that she was in such shock when she hit the water that someone had to help push her to the steps to climb out. She warned her young companions that they shouldn't jump, because she was afraid that they would drown someone else in their panic. I wanted her to stop talking. Does the mayor take the plunge? Negatory. We decided it should be a requirement for the job.
By now, the Park Tavern was open and filling up. This is the meeting spot before and after the plunge.

We got beers and t-shirts commemorating the event. I asked the woman selling the shirts if she had ever jumped. Looking guilty, she confessed that she has failed to jump for 15 years in a row. I decided that the onlookers who believe that we are out of our minds are every bit a part of the event as the plungers. The excitement and adrenaline that they create definitely helps us forget the cold. The giggle I woke up with stayed with me all day, as well as the Billy Joel song, You May Be Right.

At 2:00, "Santa" leads the motley brigade of bathrobes, biker boots, swim rings, and marching band hats (almost everyone in town owns one, since the owner of the Park Tavern ordered 100 one year for the town residents to wear for caroling). The parade travels through town to Bath Lake. Mr. and Mrs. Chadwick were enthusiastically waving and giving 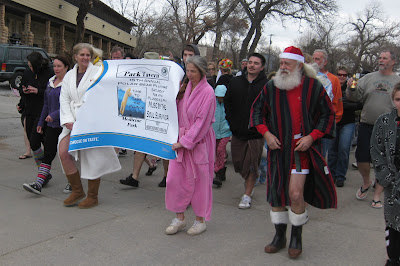 us the thumbs-up from the bakery window when we passed. We crossed the bridge to the rock island and waited for the signal. When Santa jumps in, the rest follow suit, like lemmings. This is Santa's annual bath. Many years, the lake is covered in ice that has to be broken before the plunge. Last year, the plunge was delayed for a few weeks, because the ice was too thick. One plunger who told us this was her 10th jump, described the first five as miserable because of the ice. Why she continued to jump each year was beyond me!
So, how was it? I am not a fan of cold. I dread winter each year. I count down til Spring. And, I jumped in that water like it was summer. So did everyone else. Maybe it was the group mentality, or the adrenaline rush, or the beer - but, for some reason, it wasn't nearly as cold as I expected. Although, my cheeks were seriously sore from the smile that stayed on my face. It was a most amazing experience - "cleansing," as one friend put it. 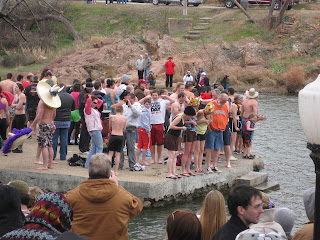 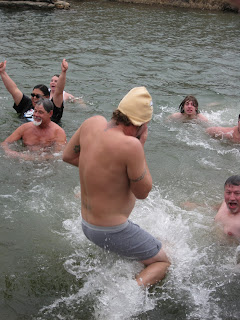 Afterwards, we stripped out of wet clothes in the parking lot; struggled to put dry clothes over our frozen, wet skin; and headed back to the tavern. It was 2:32. We drove an hour and a half each way for a 32-minute event (including time to change clothes). That's right. And, I can't wait to do it again. Back at the tavern, the band Soul Survivor was entertaining the crowd while sandwiches and venison chili were being served. I felt like one of the locals. We had been initiated.

At the end of the day, there was one brave person that stood out in my mind. It wasn't even one of the plungers - that doesn't take bravery, just an affinity for adventure. It was Mrs. Chadwick. She greeted us that morning with her bald head hidden under her hat, and a smile that couldn't be hidden - even behind her face mask that she had adorned with a small paper mustache. (As long as she has to wear a mask, she said, she might as well have some fun with it.) She couldn't be at the water's edge this year, because she is undergoing chemotherapy for breast cancer. Newspaper clippings are hung on the wall behind the counter - featuring residents of the small town. We were warned that the town reporter would be in the front row taking pictures of the plungers. She promised us that she would save the pictures for us if we made the paper. Her excitement for us was contagious, and we had to stop in the bakery for high-fives afterwards. Next year, when her hair grows back and she has conquered cancer, I think she can surely dominate the 16th Annual Polar Bear Plunge. We'll be back to take the plunge with her and cheer her on. 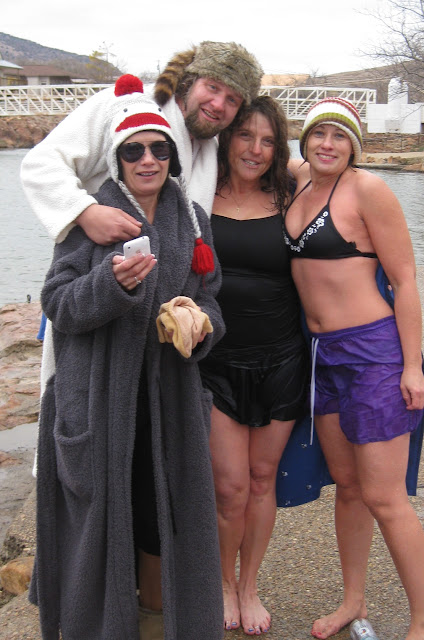