Jungles and Tornadoes, or just another Spring day in Oklahoma

I was moping around yesterday morning, feeling sorry for my spoiled self.  It was overcast, threatening rain and tornadoes; and the storms, real and predicted, were the ruling topic of the weekend.  I call myself spoiled because I've played outside every weekend of this year, as if I have no responsibilities other than to hop on rocks.

My playground friends and I had been storm tracking on the weather sites - News9, weather.com, NOAA, newsok, etc.  The weekend forecast was being analyzed and broken down by hourly increments.  Would we have time to go somewhere to play?  Would we have time to come back and grab the furries and load them up in the car and try to outrun the storms?  (Not that I am recommending this, but I don't know what shelter might allow me to bring the 3 dogs, 2 cats, a rat, and a duck that are currently living at my house.)  The chances kept dropping like the barometric pressure.

I drowned my sorrows in my coffee mug at The Red Cup.  I looked prepared for the day in my new, one-size-too-big-but-they-had-every-size-but-mine-and-I-wanted-the-red-ones rain boots, with my "cranky" socks with a big hole in the heel.  My jeans were rolled up and my gray hoodie was going to keep me cozy and warm.  Too warm - it was steamy-muggy.  I might have looked prepared on the outside, but on the inside I was fighting it.  Why couldn't this stuff happen on a weekday?

Friends rolled in and out of the Cup while I sulked.  One cheery friend pedaled over on her bicycle.  Her camping trip for the weekend had been cancelled, but she said that she was already "making lemonade" out of her now-free day.  Darn cheery people on a gray day.  Didn't she know that the sun gods were supposed to bail me out, like they usually do?  They were there last weekend when I did my first outdoor climbing trip at Quartz Mountain; even as we could see the rain streak past, but it didn't see us on the side of the granite wall.  They've been there on numerous trips to hike in the Wichitas.  Maybe those are only mountain sun gods.  Guess I need to make Facebook friends with the other sun gods and "like" their banal posts about what they are eating or where they have checked in.


The topic of conversation makes a turn like a hook-echo and suddenly we're discussing gardens and yardwork.  One friend tells us about the jungle in her backyard that is getting so bad that she fears it might swallow her 3 1/2-year old child.  She said that the worse it gets, the more she tries to ignore it.  All it does is inspire her to work harder on beautifying the front yard (which is gorgeous, by the way).  We start planning a progressive garden gnome party, and suddenly my day brightens.

One machete, two weed-eaters, three friends, and four hours later the jungle has been tamed.  She really wasn't kidding.  This jungle could have easily sucked up a small child into its vortex - maybe even a couple of adults.  She had only mentioned how the grass was up to her son's shoulders.  What she failed to mention was the forest of volunteer trees wrapped in vines and hairy vetch.

While we worked, the wind gusted around us and the clouds blew past.  Occasionally, I would wonder what time the bad weather was supposed to hit.  The various weather experts had different opinions, even on the same sites.  I figured that we would hear the tornado sirens if it got really bad.  We continued to hack away until the jungle became a backyard again. 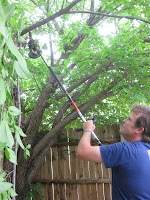 By the time we were done, seeds were already being planted in the mind to make a community garden.  The soil was rich from the vetch and other plants, and new compost was already being formed with the growth that was removed.  The former raised-bed hoophouse would make a great chicken coop (don't tell the city!).  The used-to-be jungle now had mulberry trees that could breathe again, with the vines cut and unwound from their trunks and branches.  Some pecan and oak trees remained to provide a green barrier from the sounds of the car wash on the other side of the fence.  There were several park benches that were spared from the dump when a mega-chain store axed the deli area.  The yard is now ready for summer dance parties.  I might even invite the sun gods.

Needless to say, four hours with a machete was all I needed to bring me out of a tornado-induced slump.  Or, maybe, it was the company of friends with nothing better to do on a stormy day than to organize an impromptu help-a-neighbor event.  It wouldn't have happened without the threat of violent weather.  Thank you, Oklahoma, for bringing me this gray day with some great people.  Looks like we made lemonade, after all.


P.S. - In case you were worried, the sun gods and I kissed and made up.  I thanked the cloud and rain gods for filling the river, the wind gods for pushing my kayak downstream, and the sun gods for forgiving me for losing faith, just because I couldn't see them for a day.  All is right with the world again!
Posted by Nancy L at 9:37 PM 1 comment: