The first time I met Randy, he brought a map out of the back room at the Wichita Mountains Visitor Center for my friend that was raised in Texas.  He said, "I have just the thing for you." and showed her the map.  "Look!  No words!"  I knew right away that I liked this guy.  No, not because he was bashing Texans - I happen to like the state and some of the people produced there.  I liked him because when I asked where we should hike that day, he didn't point us to the well-defined trails that are close to facilities and picnic tables.  He told us about little features of the wildlife refuge that aren't marked on the maps (with or without words). 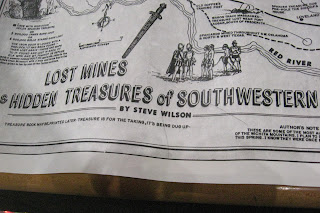 Last weekend, Randy brought out a map of hidden treasures around the Wichita Mountains.  The map was produced by Steve Wilson in 1961 and can be found in the Library of Congress.  According to the map, there are scores of Spanish and outlaw loot to be found in southwest Oklahoma.  We will save these to be explored on future adventures.  We had another mission planned for this hike.

On this particular day, we were determined to find some silver, but not for our bank accounts.  The silver we were looking for is a three-inch cross that is affixed a few inches from the ground on the side of a rock.  Randy had told us about this cross on another hiking trip.  He said that a hiker accidentally discovered it as he was kicking aside some leaves.  Randy had seen the cross himself and did his best to direct us to it.

We left the visitor center and headed to the Sunset area of the park.  My hiking companion was confident that we would find it, but I wasn't so sure.  Our treasure-hunting arsenal consisted of a topo map, a park trails map, a compass, and some pictures of pictures on Randy's phone.  He had pointed us in the general direction and told us that the cross was on the ESE side of the rock.  We were supposed to look for a rock formation that looked like a large buffalo chip and go left (although, when he said "left", he pointed to the right side of the rock formation and insisted that it made perfect sense).  We had about three and a half hours of daylight and 59,020 acres to search for a three-inch cross barely above ground-level.  Piece of cake.


The Sunset Trail (I guess?  There weren't any signs on the trail to actually indicate that it WAS the Sunset Trail) veered to the left and we took to the game trails on the right.  We crossed better-traveled trails and sometimes took the more traveled ones before ending up back on game trails again.  We passed the recognizable Apple and Pear rocks and kept Crab Eyes to our left.  Eventually, we could no longer see Crab Eyes and I was sure that our mission would fail.

Several times I would pull out my camera and scrutinize the picture of the picture of the buffalo chip rock formation and compare it to the scenery before us.  Every possibility was ruled out for one reason or another.  No, there are no trees on top of the rock.  No, the terrain in the foreground doesn't match.  No, the rock isn't that smooth, or that textured, or that color.  Finally, I spotted one that was a definite possibility.  It certainly looked like a buffalo chip to me, but this wasn't the first "buffalo chip" landmark that Randy had pointed out for us to find on our adventures. 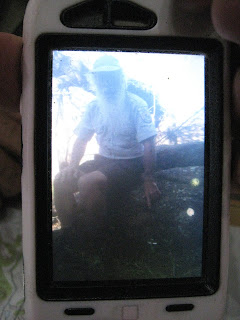 The closer we got, the more real the possibility of a match became.  The thin trail we had been following continued on to the right, so we turned left and headed toward the giant buffalo chip.  We started exploring the right side of the rock formation, just as described.  Randy mentioned that the trees in the area had been burned, but so had a third of the refuge.  We referred to the horrible picture of a picture of Randy sitting on the rock with the cross and started kicking leaves aside and examining the rocks in the area.  It wasn't long before my hiking buddy hollered out in excitement.  I can't believe I ever doubted that we would find it. 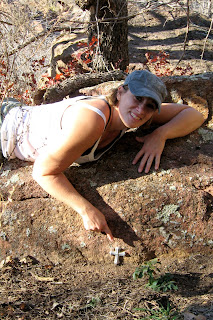 Sure enough, there was the silver cross securely epoxied to the ESE side of the rock.  And, just a few feet away to the northwest was the tree growing up through the ring of a rusted wagon wheel rim, just as we were told.  I was in complete and total awe that we hiked an hour and a half into the refuge - following various trails and not - and went right to the spot we intended to find.  We were asked later if we had GPS coordinates to follow, and the answer is "no". 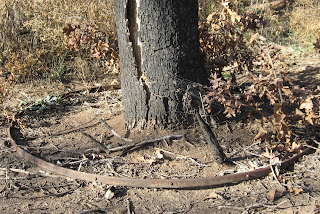 I've tried to research the story of the cross, but haven't found anything about it online.  My hiking companion looked on the geocaching sites and also found nil.  I would love to know who put it there, how long ago, and why.  For now, I have to just be satisfied that we found it.

We continued our hike and boulder-hopped around the backside of crab eyes and across open grasslands with numerous buffalo wallowing holes.  Our pace increased as the sun dropped behind the mountains and we made it back to the car just as the sunset show began.  It was another splendid adventure on a beautiful and warm December day.

The more hikes we do, the more adventures we discover for future explorations.  There are definitely hidden treasures in this part of the state, but I already found the best one.  The next time you are around the Wichita Mountains on a Sunday, stop in at the visitor center and ask for Randy.  He is more valuable than any lost loot.  And, if you're from Texas, he has a map that is easy for you to read.