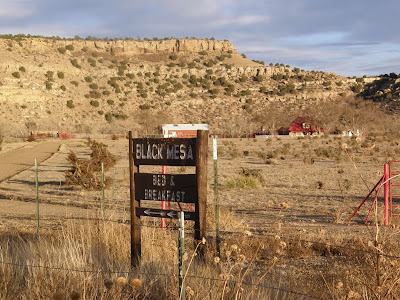 I had been driving for almost six hours and already had been pulled over for speeding, driven through a small blizzard, and now was in the middle of the blackest night and was afraid I might not ever find the Black Mesa Bed and Breakfast.  But, there it was.  Two small wooden signs pointed the way, and there was light in the middle of the mesa silhouettes on the star-speckled sky.

Two resident dogs and one familiar one greeted me as I pulled in the gravel drive.  Several cats scrambled for cover as my dogs bounded out of the car, ready for solid ground after the long journey.  Loving arms of my Rocky Mountain Man welcomed me.  This was the start of a three-day weekend where we would learn what it means when your feet stink, how to take a lesson from a duck, and what life is like where the stars reach down and kiss your nose. 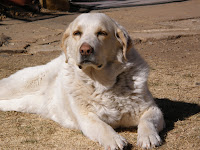 We chose to stay at the Black Mesa Bed and Breakfast because they were dog-friendly.  Between my sweetheart and I, we brought three dogs to join the two resident dogs and eight resident cats.  Star and Loco announced my late-night arrival and were eager to meet their new guests.  We stayed in one of the bunkhouses, that we later discovered used to be the chicken coop.  There was a cozy outhouse and beautiful views of the surrounding mesas on all sides.  A fair warning was given at the time of the reservation to fill up the gas tanks at the last town - about 30 miles away, depending on your approach.  This truly was the middle of nowhere.


Vicki and Monty Joe are the owners of the B&B.  They decided to open up their home for guests 17 years ago because they needed the extra income.  Between the family portraits on the wall of the bunkhouse, the colorful and mismatched towels in the outhouse, and the insistence upon gentlemanly manners at the breakfast table - I could have sworn we were staying at a great-aunt's house.  We unknowingly made the mistake of eating our breakfast outside on the first morning, but I promise we won't make that mistake twice.  Breakfast was a family affair, preceded by a brief blessing from Monty Joe. 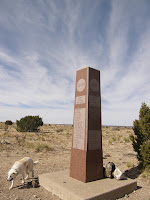 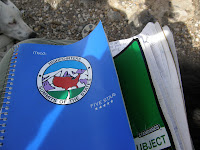 The weather was as gorgeous as a February weekend in Oklahoma could be.  We hiked with the pups to the top of Black Mesa to reach the highest point in Oklahoma at 4,973 feet above sea-level.  It was my first high-point summit.  Once we reached the top of the plateau, we spent the rest of the afternoon taking pictures, lounging on the rocks at the edge, watching the Chihuahuan ravens, and reading the journal entries in the log book by the high-point monument.  Apparently, last summer was very "grasshoppery", according to the hikers' notes.  It was a holiday weekend, but the only people we saw was a couple that we passed as we were almost back to the car at the end of the 8-mile out-and-back trail.  Otherwise, it was just the two of us, the dogs, and an abundance of mountain bluebirds. 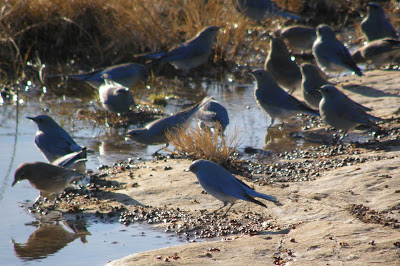 My sweetheart and I sat in the homemade swing on the front porch of the B&B that evening, sharing Oklahoma wine, Colorado cheese, and dark chocolate and reflecting upon an incredible day.  As the swing gently swayed, the sky competed with the landscape, showing off her brilliant colors.  We watched until the mesas swallowed the sun and the cholla cacti faded from a temporary pink back to olive then black. 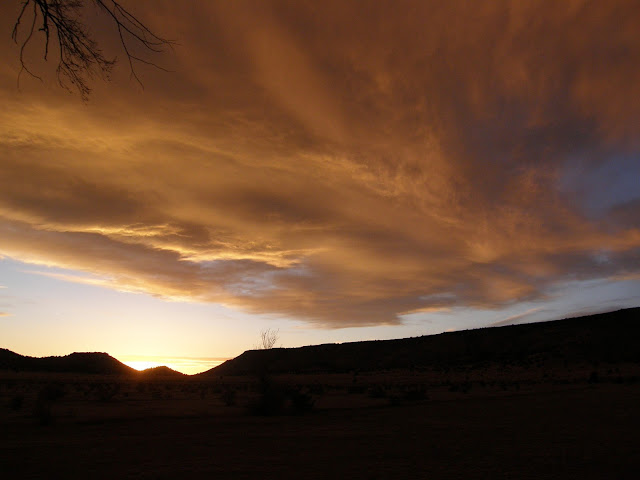 That weekend, we got to spend many hours being entertained by our hosts.  They regaled us with stores of their brief courtship and Monty Joe's unwaivering tolerance.  Monty Joe was born without a temper.  He told us that when his kids were young, he would tell them to "take a lesson from a duck" - let it roll off their backs.  His father was the same way.  When his mother had pushed him far enough, all he would say is, "Your feet stink," and she knew to back off.  They owned 700 acres and now lease some of the land to cattle ranchers.  They shared stories about the cowboys that were always polite, but Vicki warned that they weren't the best men to date.  Monty Joe said that the cowboys always have a beer in one hand and a girl in the other.  "Well, one out of two ain't bad," Vicki retorted.

We could have stayed another week, just listening to their stories and enjoying the solitude of the panhandle.  Between spotting juvenile golden eagles and walking in dinosaur tracks, the memories from that weekend create a happy place for my mind to drift.  I didn't even mind when Vicki hollered for me like she was calling the pigs to slop when I was late for breakfast one morning because I was chasing my dog that was chasing her cats.  "Nan-CYYYYY!"  Maybe it was the company I was with, our hosts, the weather, the bluebirds, or the homemade prickly-pear jelly, but I can't wait to go back.