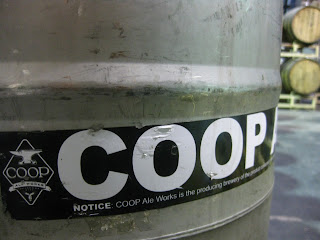 I'm not too big on beer.  When I saw that there was going to be a Beer Fest at Riverwind a couple of weeks ago, I was mostly intrigued because of all of the local breweries that were going to be sampling their wares.  I had tried a few of the local beers, but since I'm admittedly not big on beer in the first place, it would take forever to sample them all, one pint at a time.  This was the perfect opportunity to taste-test a whole slew of Okie-brewed goodness.

Half a dozen tastes later, I decide I will need to call it quits if I am going to drive home.  The event is winding down anyway.  That is when I meet "All it takes is a liver and a dream", and we decide that we should take a tour of one of our favorite local breweries - COOP Ale Works.

Fast forward two weeks and we join a handful of people on a rainy Saturday at the unassuming metal building that currently houses the COOP operations (at least until the bank signs a big check and they get to move to a much larger facility on S. Meridian).  The small "COOP Ale Works" sticker on the glass of the front door is the only indication that we were at the right place.  Co-owner, J.D. Merryweather greets everyone and quickly reminds each of them as they arrive that he isn't allowed to do any tastings, due to current laws.  Despite the warning, no one walks out.

The tour starts in the front of the warehouse, surrounded by floor-to-ceiling pallets of Horny Toad cans and shelves of different varieties of malt.  Jack Daniel whiskey barrels are wheeled in as space allows.  We move to the back of the warehouse where whirlpools and giant metal tanks turn simple ingredients into a finely-crafted beverage.  Buckets of sterilized water bubble as carbon dioxide is released from the brew in the tanks named after the Jackson 5 (and various other Jackson family, as operations expanded).  Alcohol and carbon dioxide are the by-products of the fermentation process, and the tanks can only hold 18 PSI.  J.D. shows us where the tedious canning and bottling take place in a small, four-person assembly line.  He also explains the difference between ales and lagers, for the beer-illiterate, such as myself. 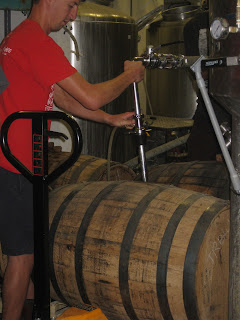 COOP is proud of its local heritage (even though J.D. is originally from Ohio and admits that he has tried to leave Oklahoma on several occasions).  They participate in loads of local events and charitable functions.  Their website boasts of their focus on being local, sustainable, and high-quality/ low impact.  They were one of the first local businesses to be 100% wind-powered.  There are future plans to purchase hops grown here in Oklahoma, if the water-hungry crops are successful.  In addition, COOP prides themselves on over-doing the customer service side of the business - definitely a plus! 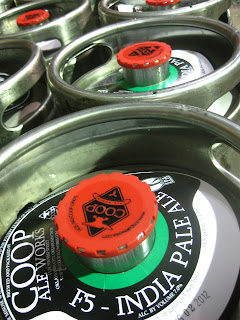 I asked about the COOP logo, since an anvil just isn't the first thing that comes to mind when you think about beer.  He explains that they are one of the few breweries that still brew in wooden barrels, which were hand-crafted with anvils.  The COOP name comes from a combination of a "coop"eration between the group of friends that started the company as well as the number of "co-op's" around Oklahoma and neighboring states.  While some of the beer label art is self-explanatory (Horny Toad, DNR, F5, and Native Amber), some of the others are a little more personal.  The Gran Sport Porter features a vintage Vespa, that was one of the 30 Vespas that he owned at one point.  ("Why 30?" I ask.  "Because I didn't have room for 31," he answers.)

Even though the current shop seem tiny in comparison to most brewing operations, it is exciting to see what this company has done in 3 1/2 years.  Oklahoma is now one of the top three brewing locations in the nation, and COOP is winning awards and building a brand that is gaining expanding recognition.  I'll raise a glass of my personal fav - the Gran Sport Porter - to that!  Cheers! 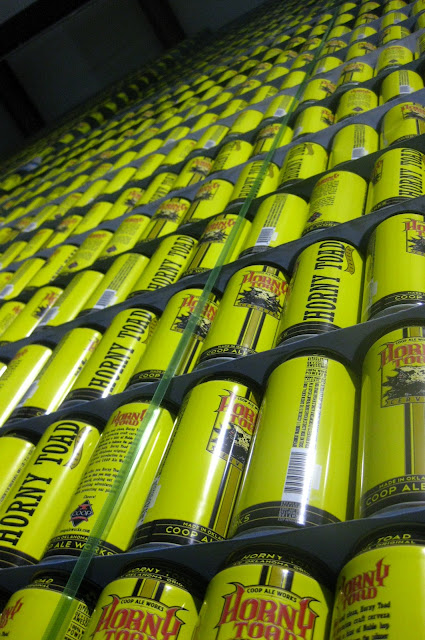 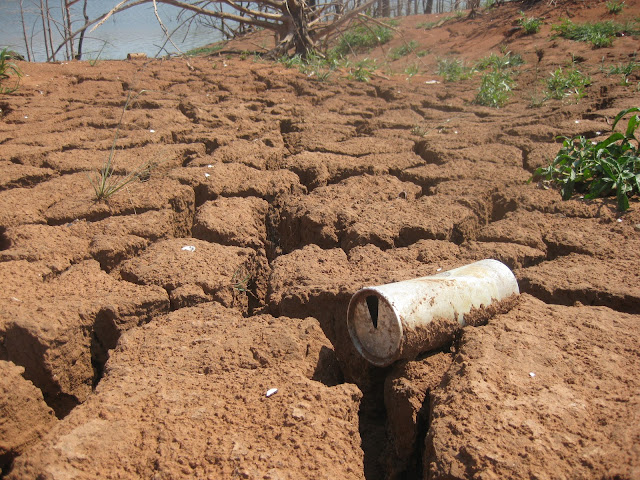 We were driving through towns only heard about during severe weather coverage on television (okay, I mean the radio, since I haven't owned a TV in many years).  The kayaks were strapped firmly to the roof and were buckling as the heat made their plastic frames pliable.  Folks in towns like Custer City and Thomas stared and shook their heads, as if they had just seen a car with surfboards driving through Oklahoma.  Our likelihood of finding water to wet the boats was looking as grim as surfers seeking to catch their next wave on the inland seas.

The current drought is going on two years.

Today's plan was just to paddle around at American Horse Lake.  On the way there, I mentioned that the last time I had visited, the water had dropped a good three feet in a matter of two weeks.  That was probably two or three months ago - before the mercury hit the hundred-teens. 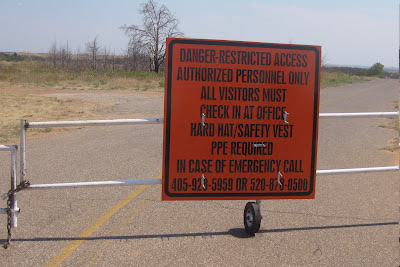 An hour's drive later, I make the last slight left to the lake and meet a new gate with a bright orange sign announcing "DANGER - RESTRICTED ACCESS" and forbidding entrance.  We got out and walked the last few hundred yards to what used to be the water's edge.  There was no lake.  There were hills of red dirt and shale.  Beer bottles from years past and entombed plastic tubs that held bait in a past life.  When we finally found water, it was a stagnant, green puddle.  There was no sign of the clear waters that had stolen my heart the first time I discovered this lake.  We would later learn that the lake was being drained for more work on the dam that was damaged during flooding several years earlier.  For now, we were rejected.  All we could do is return to the car and vow to come back without boats and armed with trash bags, so we could clean up my playground in anticipation of rains that will revive her and make her beautiful once again.
GPS, maps, and the Oklahoma Water Atlas are consulted and we redirect to Canton Lake.  All that I knew of Canton, was that this was the source that fills Overholser, Stinchcomb, the North Canadian River (oh, I mean the Oklahoma River), Lake Hefner, and my water bottle.  The backroads take us through dry farmland and past many unmarked dirt and gravel roads.  I'm always excited to drive on an Oklahoma road that I haven't ever seen before.  As my traveling companion says, "when plans fail, the journey begins".  Little did he know at the time that the plans would fail more than once on this day. 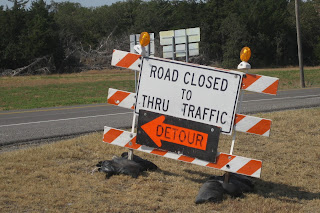 "ROAD CLOSED TO THRU TRAFFIC" the sign read, just past the sign that pointed the way to Canton Lake.  Well, we had been debating whether to go to Canton Lake or Foss Reservoir, so the next choice was obvious. Besides, the map shows that we would be crossing the South Canadian River, so we could always just stop there and slide the boats down the side of the bridge and launch into the sandy riverbed. We recalculated our route.

The wide bridge announced the South Canadian River crossing, but we peered over the sides and couldn't see any water in either direction.  Not a puddle, not a ribbon of stream, not a drop.  I was beginning to think that the townfolk in their pick-up trucks were right about our deteriorated mental condition.  What were we thinking when we loaded boats and set out to go kayaking today?

I crossed my fingers and questioned my loyalty to the sun gods.  We need clouds and rain, too.  Why hadn't I realized this before today?  Oh, what have I done?!?  I search for upbeat tunes and continue speeding across dusty towns with more people in the cemetery than the last census.  One town boasts that it is storm-ready and I wonder what that means.  Union Pacific trains stretch for miles in their stillness, with just enough gaps to keep from blocking the numbered county roads.  I wonder if there will be another gate, another roadblock, or another dry patch of land awaiting.  There was no Plan E. 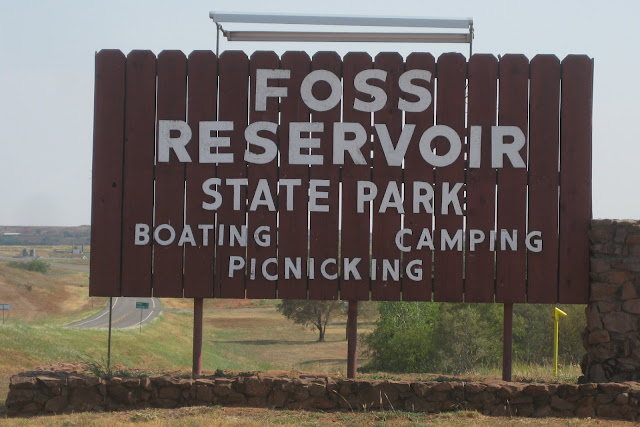 Blinding sun reflected off whitecaps and sparkling white boats bouncing skiers.  The three-mile earthen dam (one of the largest earthen dams in the world) wasn't doing a "dam" bit of good, since the water had receded several feet from the foundation.  But, there was water, and lots of it.  Probably not 63 miles of shoreline, as the Oklahoma Water Atlas boasted, but there was still plenty to share.
I already ha 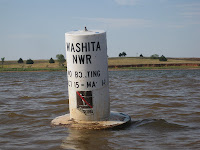 d the launch site picked out on the map - the furthest boat ramp from the dam, and the one bordering the Washita National Wildlife Refuge.  There was only one other boater in this part of the lake, and they were anchoring for a walk on the sand and a dip in the inviting water.  Our kayaks splashed their way across the lake against the wind.  The drips of water blown from the paddle blades were welcomed on hot skin.  This was nothing like the quiet little pond that we were originally trying to reach.  Good thing that we are Oklahomans and are resilient, stubborn, and still able to evolve.  We will make it work, and we are going to enjoy this journey, wherever it takes us. 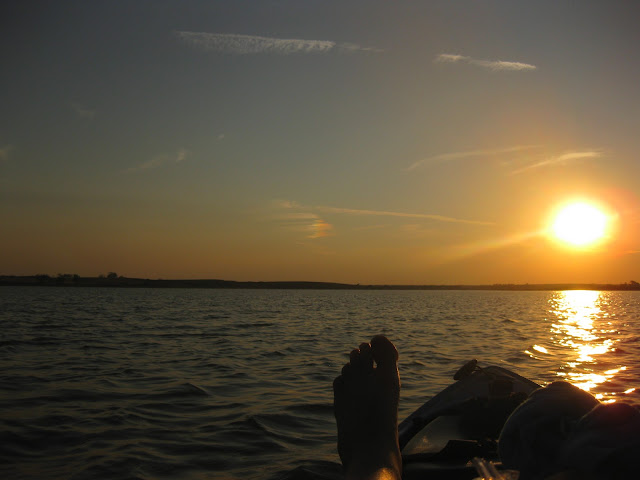 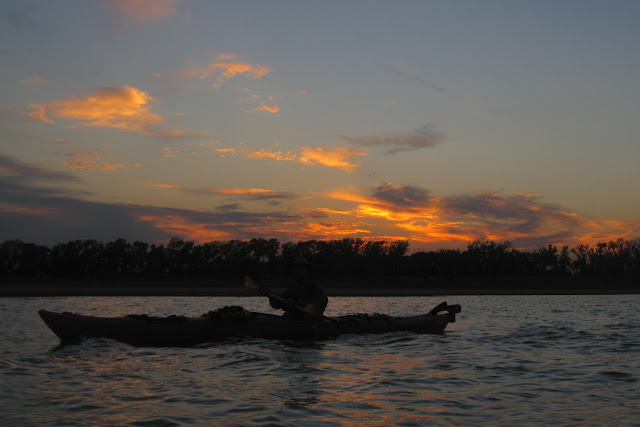