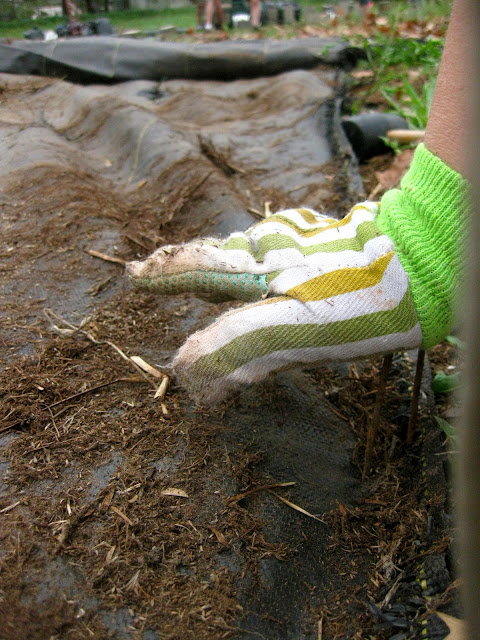 I had the honor of sharing in the Spring farming make-ready at Organic Gardens in El Reno last Sunday. The farm is situated among beautiful rolling pastures and wooden barns that are slowly returning to nature. By the time I arrived, there was already a small army of people busily preparing the beds for whatever our barbarous Oklahoma weather might bring. Last year, we had record-breaking low temps in the winter, and broke numerous heat records in the summer - including more than 60 days with temps in the triple-digits. We had a serious drought that tested the resilience of people and plants. Another farmer mentioned to me recently that he had heard that a mild winter, like what we just experienced, might mean a mild summer. Based on the extremes we had last year, I believe that it makes sense.


Last summer, Organic Gardens had several hundred tomato plants that combined only produced 20 pounds of tomatoes . This year, they are trying some new things and incorporating knowledge from the other side of the earth - Israel. Why Israel? Because this hot, dry country exports 85% of the food they produce. They have figured out how to grow food in an otherwise unfavorable climate. Mardel, the owner of Organic Gardens, along with her son, John, and John's girlfriend, Stephanie, are constantly making adjustments in order to maximize their results - much like the temperature and humidity "brain" in the greenhouse that is constantly taking readings and adjusting fans, flaps, vents, and water. The family calls upon the wisdom of their fellow farmers for ways to reduce heating costs in the winter, how to protect tender plants from the wind and heat, and how to turn one town's pollution (oyster shells) into another town's gold.

As Ron put it, every work day should include knowledge sharing. This was definitely John's forte' and he rocked it. There is no detail overlooked on the farm. The design, the sustainability, and the footprint on this earth are considered in meticulous detail. Almost all of the materials inside the greenhouse are recycled. The wood was salvaged from construction sites. The metal legs for the tables were also recycled, as well as functional because the mice can't climb the slick metal, so they can't tear through the seedlings like children opening presents on Christmas morning. There are plans for additional insulation, thermal heating that involves 55-gallon drums of water, a compost pile to generate heat in the winter, and more improvements to the watering system that save labor and water. There is no resistance to change here. Ideas are volleyed around on the spot and collaboration makes anything possible. My mind was overwhelmed and only caught a fraction of what was being discussed. I am poorly over-simplifying and paraphrasing the discussions, but I know that I want to keep coming back and soaking up a little more each time.


Our job on this day was to prepare the beds for mostly tomatoes and sweet potatoes. Let me tell you what this does NOT include. There was no hoeing. There was no plowing. There was no roto-tilling. There was no weeding. The only tools used were a few hammers and mallets and a pair of scissors. A couple of weeks ago, horse manure from a Piedmont farm was spread directly over the weeds and the last of the winter crop of pea greens. Today, we added bags of leaves, wood mulch, and coffee grounds on top of the manure. Three rows of drip tape were unfurled down the length of each bed. Then, weed fabric with a loose enough weave to allow water penetration was rolled out on top of the organic matter. It was a blustery day, to put it gently, so the whole process required the coordination of many hands in such a way that the wind was not allowed to spoil the work.

Somehow, in between leaf fights, tackling, and efforts that required nothing less than Sumo-wrestler sounds; we still managed to stake down all of the beds so that the recipe ingredients could cook up a moist, fluffy ground - rich in earthworms. The weed fabric will provide warmth on the cooler days and shade in the warmer months. Small holes will be made in order to plant the crops, while keeping the undesired plants out. In between the beds, we left a very small gap. Just enough space to plant giant sunflowers and okra that will serve dual-purpose as shade and wind blocks. The flower heads can later be dried and sold at the farmer's market as bird feeders, and the okra can be sold and shared.

With all of the volunteers we had that day, we were also able to go ahead and pull up the weed fabric and drip tape from last year's beds, salvaging and recycling every bit. We had plenty of help from Sally, the resident cat, as well as a salamander or two that helped Blair invent some new dance moves for her birthday party that evening. John later remarked that we had accomplished three to four weekends worth of work in that one day.

It wasn't all work, though. The day also included a tour of the greenhouse and everyone got to pick out some plant starts to take home, as well as a windowsill lettuce tube and giant tulips the color of lemon meringue. Lunch was a combination of contributions from everyone. There was quiche made with eggs from Doug's farm, homemade wheat bread, salad freshly-picked, homemade pickles and peppers, peanut butter chocolate chip brownies, and more. When the work was done for the day, we were treated to the house specialty - margaritas.

All participants agreed that we'd like to come back in two weeks and do the same preparation on the north beds. A community had been created in those few hours, and I believe that we all feel a personal bond with the farm and each other. We left smelling oh-so-organic and anticipating the food-futures that we are helping to create.


Do you know where your food comes from?
Posted by Nancy L at 9:28 PM 1 comment: