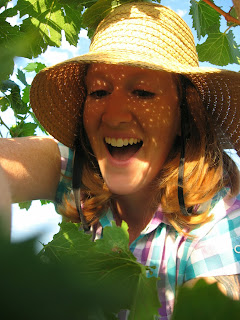 Last weekend was the first-ever Watonga Cheese and Wine 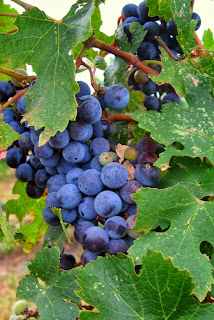 Festival.  The Watonga Cheese Festival has been held since 1976, even after the cheese factory was destroyed by Tropical Storm Erin in 2007 and relocated to Perryton, TX.  This year, the OGIC Wine competition was added, marrying the two lovers and bringing my Whirlwind Winery experience full-circle.

My first encounter with Whirlwind Winery was at the almost-rained-out cheese festival in 2012.  While the rest of the exhibitors were packing up, we made our way to the winery where we were invited to taste their selections, including a watermelon wine that was still in the makings.  Along with the tastings, we were given a tour of the facility and invited to help with the harvest the following year.

I called Brad Stinson, co-owner of Whirlwind, near the end of August this year to see if the offer still stood.  I was afraid that I was too late, since I only knew that it would be around August, and we were pushing the end of the month.  Turns out, I was just in time, since the first harvest of the year had been scheduled for the following weekend. 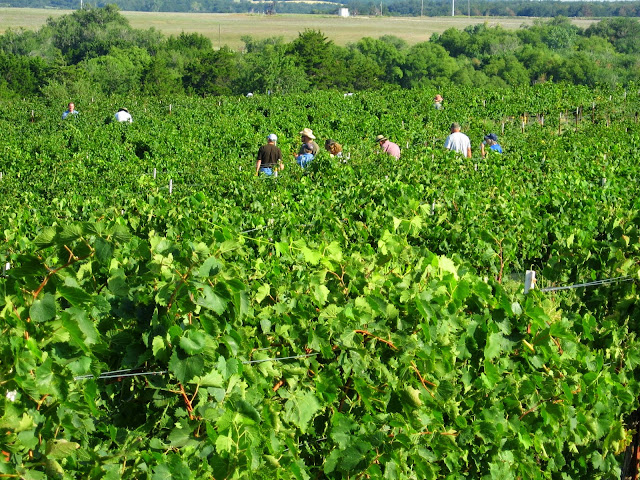 I gathered a few friends and coffee for the early morning drive to the vineyard in Fay, OK.  We were supplied with "nippers" and buckets and a short tutorial and went to work.  Our harvest companions that morning consisted of a handful of "real neighborly" friends and family, including the other co-owner - Don - and  Brad and his brothers - Chad and Thad - and their father, Allen.  When I commented that "Allen" doesn't rhyme with Brad, Chad, and Thad; Chad quickly retorted, "No, but 'Dad' does."  Their mother later told me that if she would have had another boy, she would have named him "Aw-Gad". 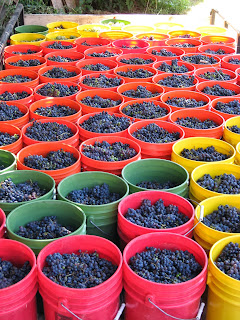 We called it quits for the day around 11:30 a.m., just as the mercury hit the century mark.  We caravanned to the winery where we were treated to a plethora of homemade pastas, salads, bread, fruit, dessert, and (of course) wine.  There, I met the bold and adorable Russian, Tonya - Brad's wife.  She told me that they met on the internet, where she had advertised herself as "good-looking and good-cooking", but was quick to state that she was NOT a mail-order bride.

When Brad decided a few years ago that he wanted to grow grapes and open a winery, Tonya let him know that she didn't come to America to do manual labor.  This expensive and time-consuming hobby takes five years just for the grapevines to mature.  The weather and critters can completely obliterate a whole year's crop.  When Don became a partner, he brought his own grape-growing experience with him and together they have learned a lot about the business.  We heard stories about training sheep to only eat the goathead stickers that are plentiful in the sandy soil, but to leave the fruit alone. I'm still not sure if it is genius, or cruel.

After lunch, we got to participate in the actual winemaking.  No, we didn't stomp the grapes.  A shade canopy was erected behind the winery and the trailer loaded with buckets of grapes was backed right up to the "crusher".  The buckets
were weighed, then dumped into the "crusher" that separates most of the stems from the fruit.  From there, the fruit and juice is either dumped into a 50-gallon drum to age for a short-time, or into the grape press to extract the juice with a manual crank.  Yield from that first harvest was around 1500 pounds of grapes. I was a bit surprised, since the first few rows at the vineyard looked like their Merlot (Okie-
pronunciation is phonetic) was only going to be Mer-little.  Fortunately, 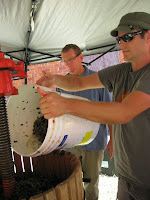 we ended up finding plenty that the birds and late-April freeze had spared.  We even matched that quantity a couple of weeks later when we returned to harvest the rest.

Our inexperienced group learned a lot about the sugar content of grapes (measured in "brix" with a refractometer), patience required to grow the grapes (and day jobs, too), and how the sunshine increases the sugar content.  I found a similar experience in Napa Valley advertised for $1200 per person.  Granted, it might not be triple-digit temperatures in Napa Valley, but we got to participate for free.  On top of that, we developed friendships and received VIP treatment at the
Whirlwind Winery at the Watonga Cheese and Wine festival this year.  I suppose the experience will really come full-circle next year when we return to try the 2013 Serendipity. 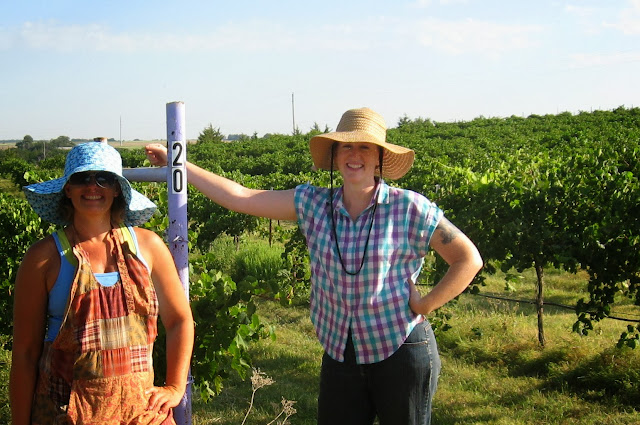